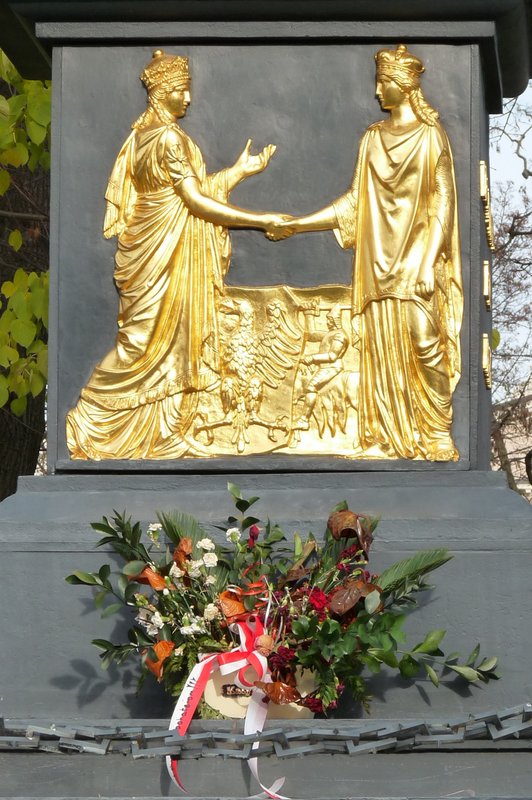 Litewski Square. Historic records suggest that in the 16th c. Lithuanian noblemen resided here during the proceedings of the Sejm debating on the signing of the Polish-Lithuanian Union in 1569. This significant event is commemorated with a monument shaped like an obelisk. In the square there are also monuments to the Unknown Soldier, the Constitution of May 3rd 1791, and to Marshal Józef Piłsudski. Buildings situated by the northern side of the square used to be palaces owned by the Czartoryski Family, the Lubomirski Family or the Governorate authorities after the partitions of Poland. Opposite there is an impressive edifice of the Main Post Office in Lublin, which owes its present look to a reconstruction from 1921. 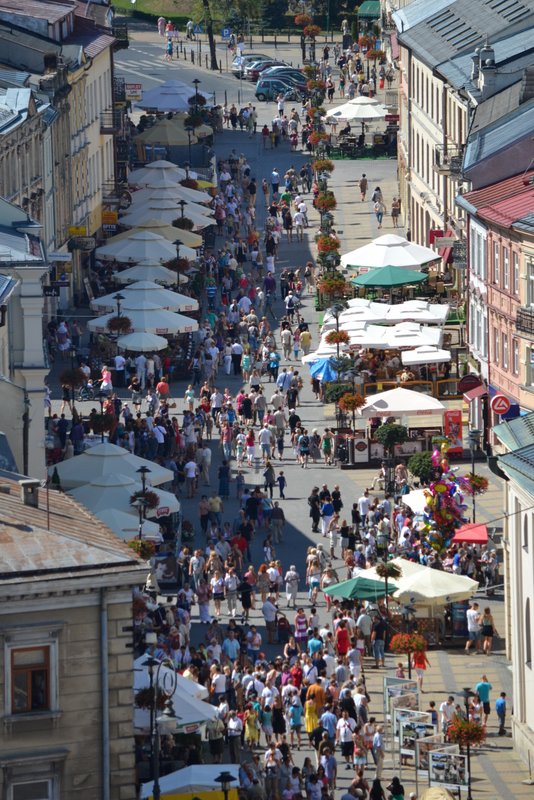 Krakowskie Przedmieście. The part of Krakowskie Przedmieście between Litewski Square and the Old Town is lined with historic townhouses, which were transformed in the 19th c. into tenement houses. Decorative elements of the façades have survived on some of the buildings. Heading in the direction of the Old Town you can see two interesting buildings on your left – the 15th-century Church of the Holy Spirit and the New City Hall, the seat of Lublin’s authorities built on the site of the burnt-down church and monastery of the Discalced Carmelites. 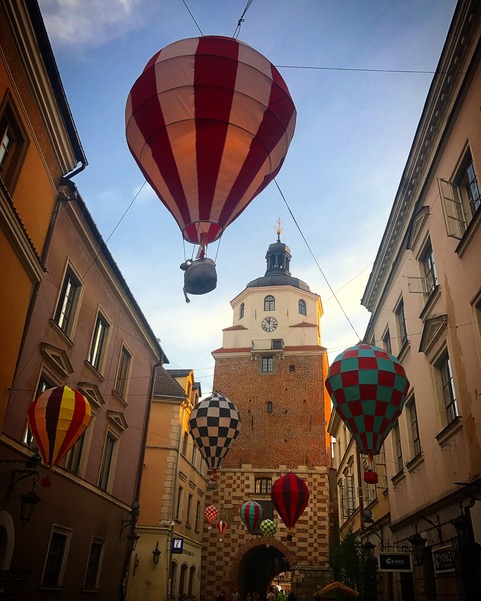 The Cracow Gate.The symbol of the city and one of the most beautiful landmarks in Lublin, it connects the City Centre with the Old Town. The gate owes its name to the historic royal route leading from Cracow, via Lublin to Vilnius.  It served as a defensive structure, an observation tower for the fire rescue, and a residence of the clock-master operating the clock. The gate also had a trumpeter who would play a bugle call. Presently it is the seat of the Lublin History Museum.

Just behind the Cracow Gate, in the first building on the corner of Jezuicka Street and Bramowa Street you will find the Lublin Centre of Tourist and Cultural Information (LOITiK). It is the best place to get maps, guidebooks and promotional brochures about Lublin and the Lublin Region and to buy interesting souvenirs. After leaving the LOITiK we will turn right. 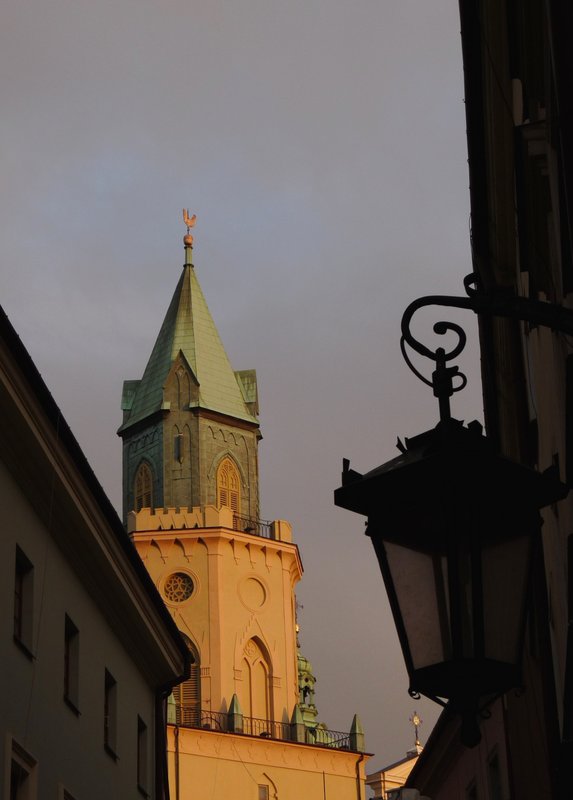 The Trinitarian Tower. The impressive Trinitarian Tower was once a mere gate in the defensive city walls. In 1819 it was reconstructed according to the design by Antonio Corazzi and began to dominate over the city. If you aren’t afraid of heights, you can see a fabulous panorama of Lublin from atop of this 60 metre high tower. The tower is crowned with a finial - a brass cockerel that, as legend has it, used to warn local residents of oncoming danger and still watches over Lublin. 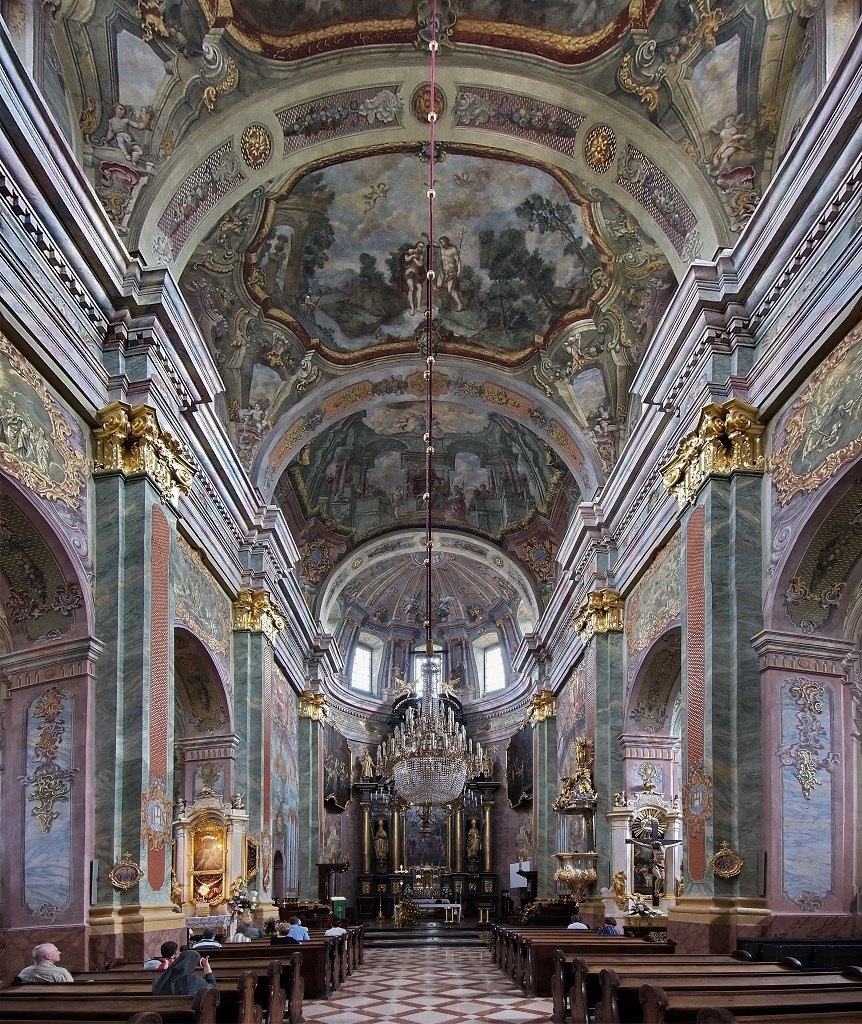 Lublin Cathedral. The Church of John the Baptist and John the Evangelist was built in the years 1586-1604 for the Jesuit Order. It was designed by the Jesuit Jan Maria Bernardoni inspired by the seat of the order in Rome – the Il Gesu Church. In the 18th c. Józef Meyer decorated the interior of the church with beautiful wall paintings depicting biblical scenes. This Jesuit church became the cathedral in 1805 when the Lublin diocese was created. Partially damaged during World War II, the cathedral was renovated and given the shape we can see today. Inside there are amazing illusionistic polychromes and rich interior décor. The door at the end of the right side nave leads to the acoustic vestry, the treasury and the crypts. All three places are a must-see. 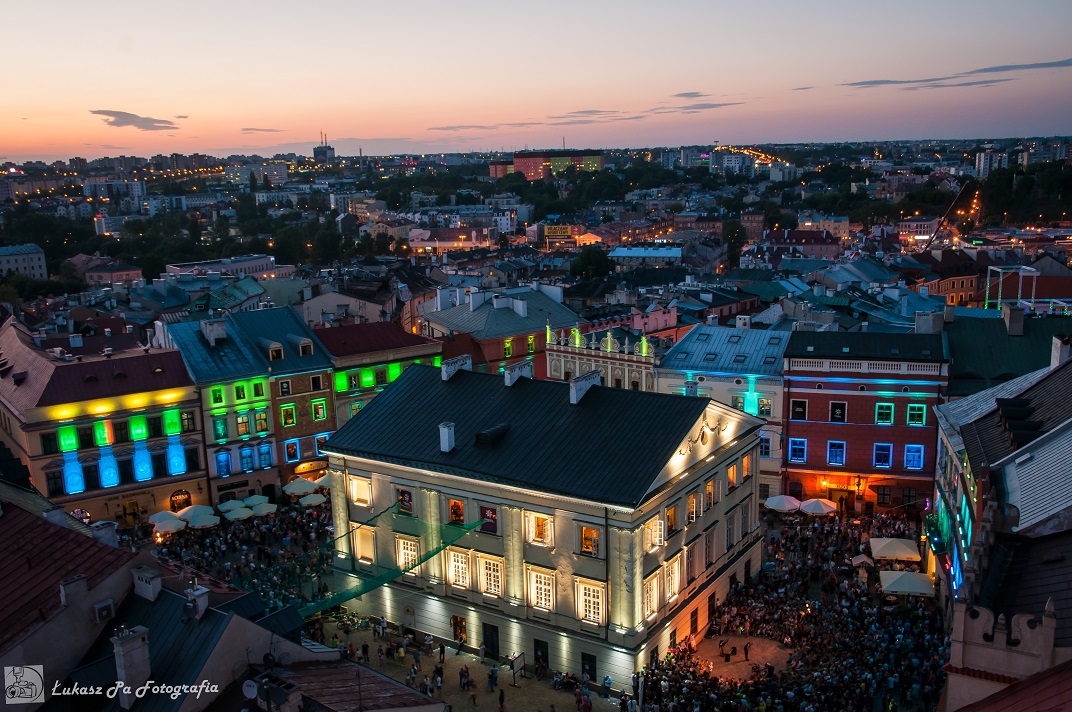 Old Town Market Square. The market square was marked out almost 700 years ago, after Lublin received its civic charter (15th August 1317). In 1575 a great deal of the wooden buildings burnt down and new presentable brick townhouses were erected in their place. They are named after their historic owners: Konopnica, Lubomelski, Chociszewski, Klonowic, etc. 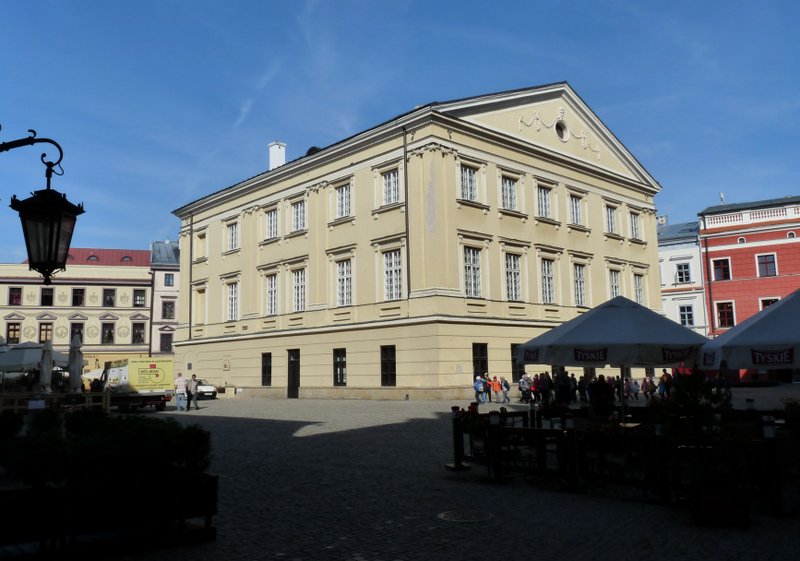 The Crown Tribunal. In its heyday this outstanding edifice situated in the centre of Market Square served as the Crown Tribunal (1578 – 1794) – the highest judicial instance for the nobility from the whole Małopolska Region, established by King Stephen Bathory. The only other tribunal in the Kingdom of Poland was in Piotrków Trybunalski.  Widely-practised corruption of judges and unjust sentences led to the dissolution of this institution. The most notorious case was a so-called a court of devils that supposedly took place in 1637. About 150 years later the building was redesigned by Dominic Merlini, a court architect of King Sigismund Augustus, and gained the external appearance we can see today. The cellars of the building are the starting point of the Lublin Underground Route. 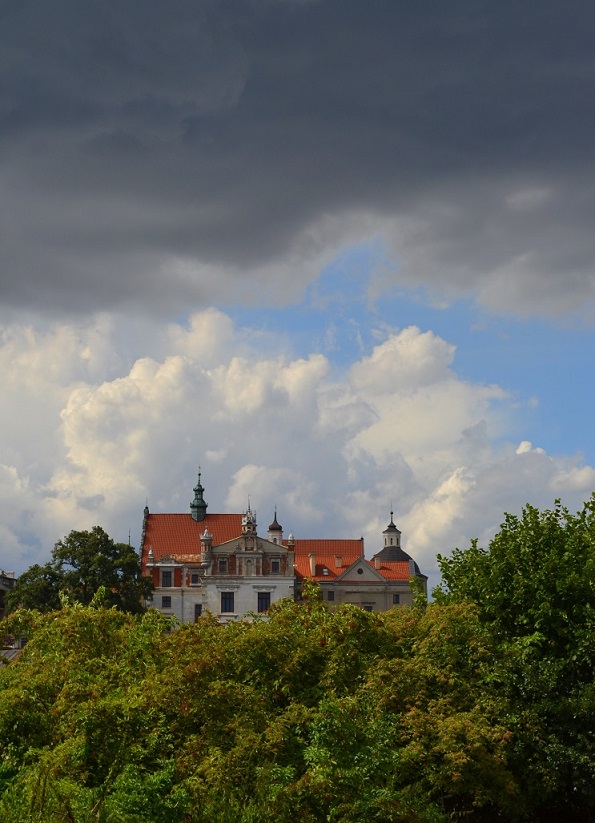 The Dominican church and monastery complex.The Dominican Order probably arrived in Lublin in 1230. They built a wooden oratory of the Holy Cross, which was later replaced with a brick Church of St. Slanislaus Bishop and Martyr. The inside of the temple features many interesting exhibits e.g. the painting ‘The Fire of Lublin City in 1719’ and a reliquary that enshrined a fragment of the True Cross, brought to Lublin by the Bishop of Kiev Andrzej in 1420, which supposedly had miraculous powers. Unfortunately, in 1991 the holy relics were stolen and have never been recovered. Let’s go inside the church to look at the interior décor and an exhibition dedicated to the history of the Dominican Order in Lublin. The most precious exhibits can be seen in the treasury. 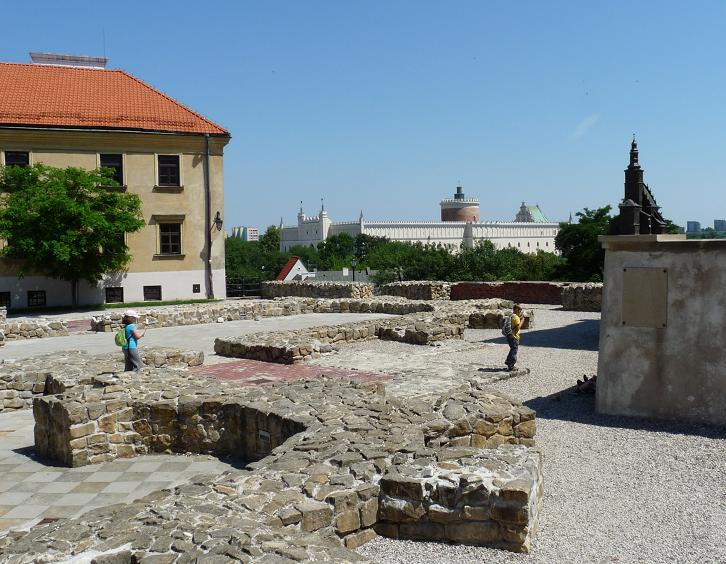 Po Farze Square. The name of the square is connected with the first church built within the city walls – the Parish Church of St. Michael the Archangel. It was founded in the 13th c. by Leszek the Black as a votive offering for the victory over the Jatvingians. In the 15th c. a mighty tower was added to the western side of the church, which was visible from a 5-kilometre distance. The parish church was demolished in 1857 due to its poor condition. Fully reconstructed foundations of the parish church and a scale model of it can be seen in Po Farze Square. 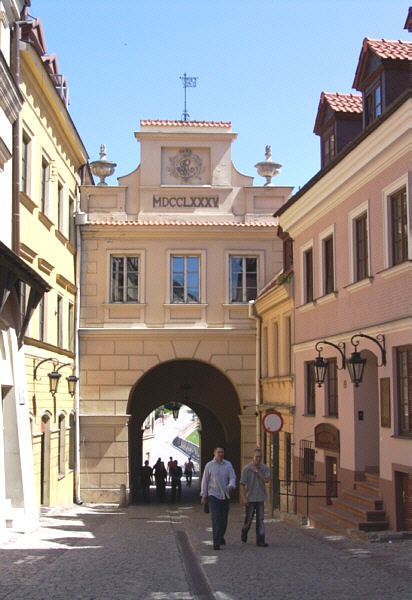 The Grodzka Gate. This 14th-century fortified gate was a part of the defensive city walls and a gateway between the Christian and Jewish quarters - which is why it was often referred to as the Jewish Gate. It was originally built as a quadrilateral structure crowned with crenels. Later on a foregate supported with buttresses was added. In the end of the 18th c. the gate was rebuilt in a Classicist style and its defensive features were removed.  The date MDCCLXXXV and the monogram ‘SAR’ (Stanislaus Augustus Rex) placed on the façade remind us of this renovation. Presently the building is the seat of the Grodzka Gate - NN Theatre. 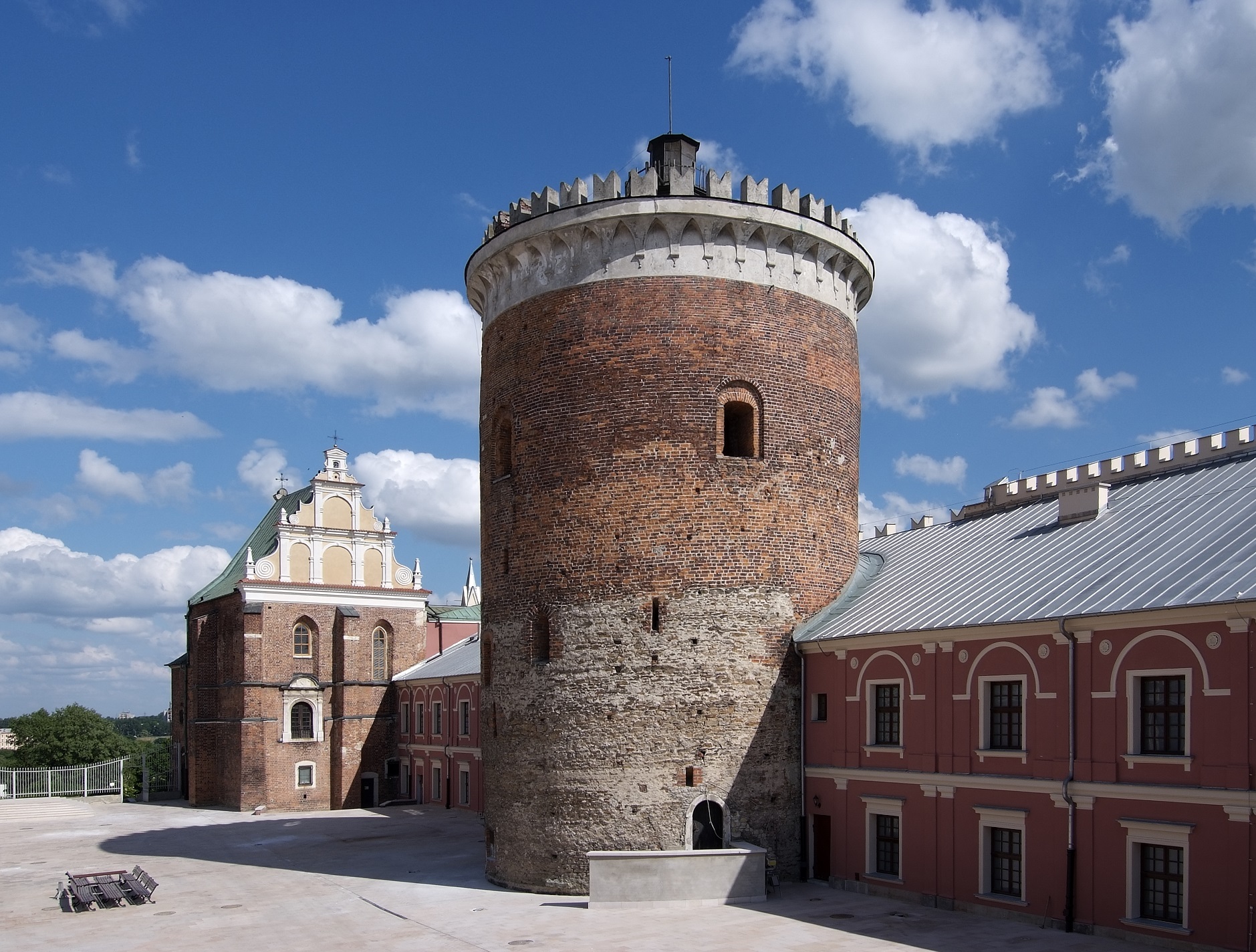 Lublin Castle. The present-day castle looks much different than it did in the past. It was originally a wooden stronghold, burnt down during the Tartar invasion in 1341. King Casimir the Great ordered the castle to be rebuilt from brick and stone. Over the following centuries the building was extended, modernised and revamped and eventually, about 200 years ago, gained its present shape. It served as the seat of local authorities, king’s quarters, a prison and presently a museum. Polish kings: Casimir the Great, Ladislaus Jagiełło, Sigismund II Augustus and Casimir IV Jagiellon frequently resided at the castle; the negotiations over the Polish-Lithuanian Union were held here in 1569. The oldest parts of the castle are the 13th-century donjon and the Holy Trinity Royal Chapel, which boasts absolutely unique Russo-Byzantine frescoes – one of the greatest treasures of Lublin. Let’s go inside and find out what makes them so special.