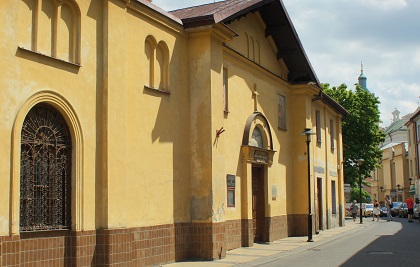 This church was built in 1786 by Greek Orthodox merchants living in a small community in Lublin. There was a need to build a new temple as the Orthodox church in Ruska Street was given to the Greek-Catholic Church in the 17thc. The Lublin Greek Orthodox parish was subordinated to the Patriarch in Constantinople, but the small local community was unable to support the new temple financially, so consequently it began to fall into disrepair.

At the end of the 19th c. it was taken over by the Russian Orthodox Church subordinated to the Patriarchate of Moscow. In 1922 the church underwent a radical reconstruction of the interior connected with the removal of the iconostasis and became a Roman Catholic temple, consecrated and named after St. Josaphat. After World War II some of the buildings of the church complex were converted into the seat of Caritas, a charity organisation. Presently they host St Brother Albert’s Aid Society.

St. Josaphat’s Church is a hall church under a single immense roof, without a choir area, which makes it an exception among Lublin churches. Inside it has contemporary furnishings.