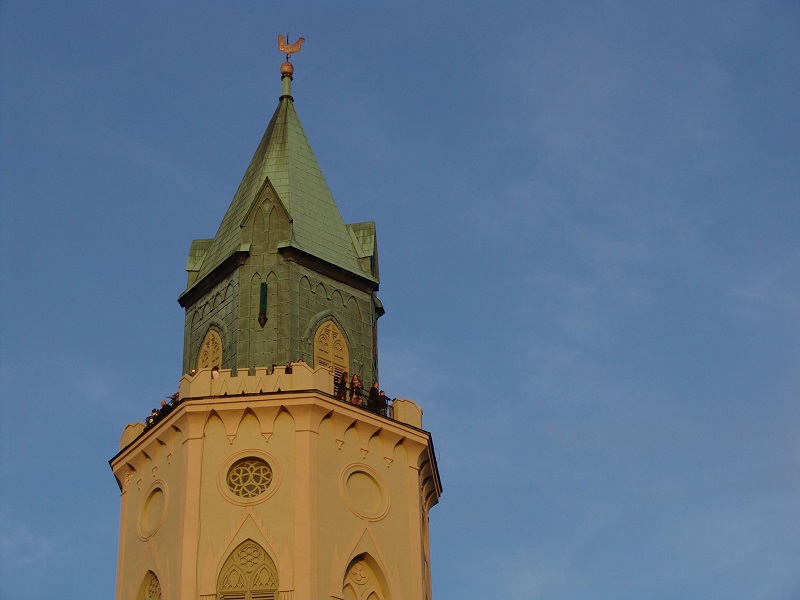 "On its tower a tin cock fluttered, another - bore a clock that hummed a tune" - this is the beginning of A poem about Lublin by Józef Czechowicz. According to the legend, said tin cock, standing on the top of the Trinitarian Tower, used to warn the citizens about upcoming danger. Today it allegedly crows when a chaste maiden walks through the gate in the tower...

The tower was designed by the Italian architect Antonio Corazzi. The works were completed in 1827 and the tower's appearance has not changed since then. Its base is a medieval defensive wall. The neo-gothic tower is about 60 meters high, it has a quadrilateral body and an octagonal superstructure topped with a conical roof covered with sheet metal. The tower has two façades of the same design, facing the Old Town and the Cathedral Square. From the east and west it is adjoined by the former Jesuit buildings. The main axis of the façade is framed by two pilaster strips running along the entire quadrilateral body. The vaulted passage is topped with a sharp arch, above which there is a triangular cornice with a cube decoration.

The tower houses the Archdiocese Museum of Sacred Art, which presents a collection of religious sculptures, paintings, and many other interesting exhibits. There is an observation deck at a height of 40 meters, from which one can admire the panorama of Lublin. To get there, one has to climb several levels and as many as 207 stairs. The entrance to the tower is from the side of the Cathedral Square. Please note that in bad weather (rain, snow, strong wind etc.) the the tower is closed.