Heritage trail of the Lublin Jews: The former Jewish district 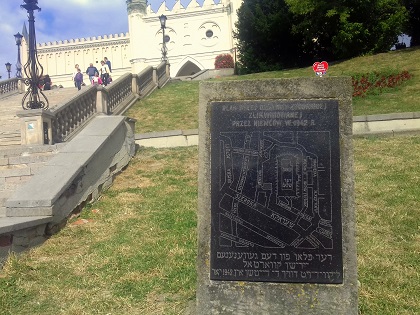 On the stone obelisk at Castle Square there is a plaque showing the plan of the former Jewish quarter. Its main axis was centrally located Szeroka Street, which led along the current Castle Square. It was the most representative part of the Jewish quarter, with synagogues and impressive tenements located by it. Every day, apart from the Sabbath, shops were open, workshops operated, passers by dealt with their affairs, children played in the streets, in the courtyards, and went to cheders.

In 1941, the German occupiers decided to create a ghetto for the Jews in this area. Its liquidation in 1942 meant almost complete demolition of buildings. Most of the ghetto inhabitants were murdered, mainly in the death camp in Bełżec as well as other places in the Lublin region.

In the 1950s on the ruins of the former Jewish quarter the People’s Gatherings Square (the current Zamkowy Square) was created. Its project, implemented in 1954 to celebrate the tenth anniversary of the Polish People's Republic, was supposed to refer to the concept of the People's Festivals Square, developed in the 18th century for the Kremlin by Vasyl Bażanow. A complex of buildings of the Union of Workers' Housing Estates "Podzamcze" was built around the square.