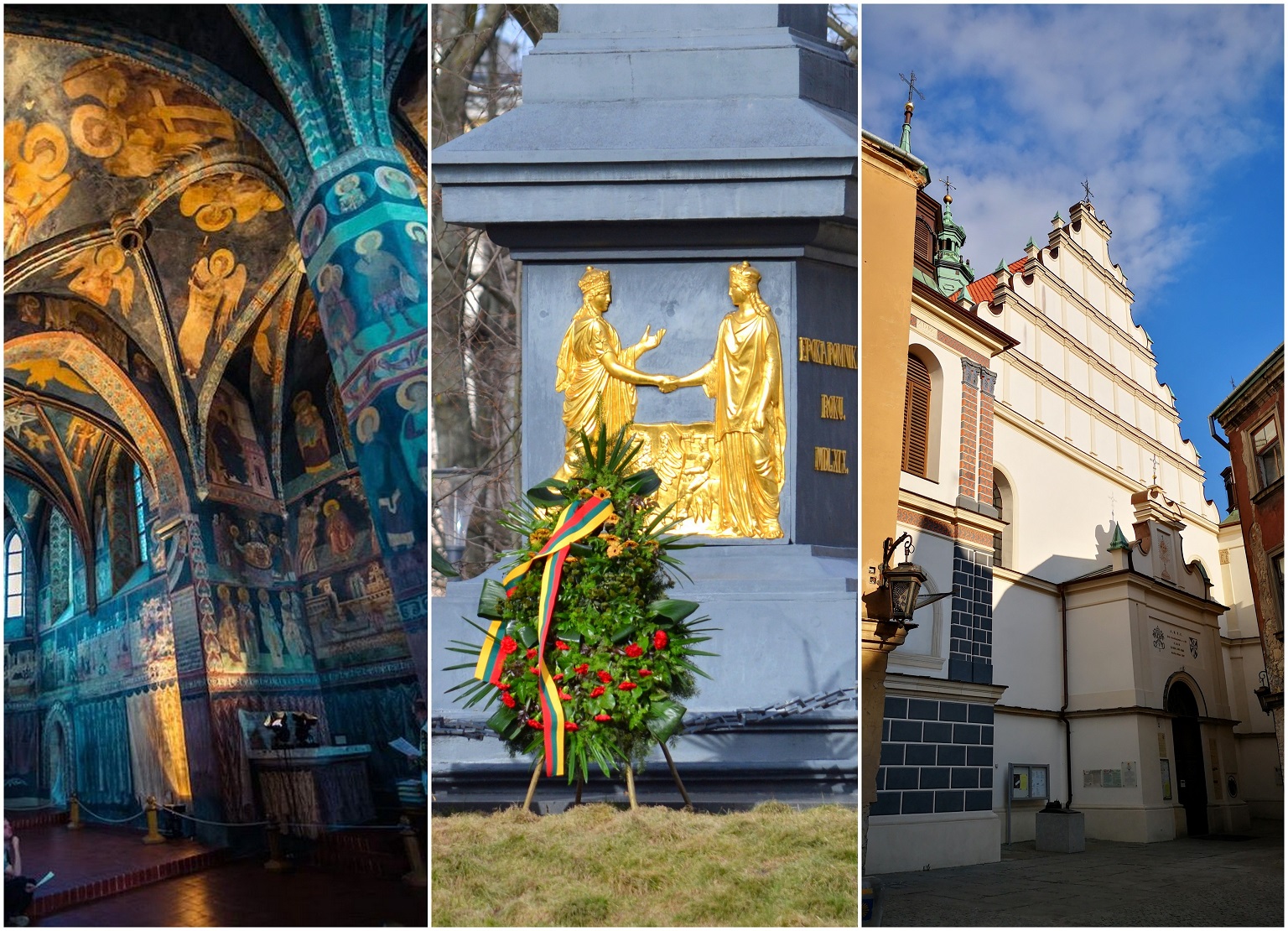 An important moment in the history of Lublin was signing the Union of Lublin. On the 1st of July 1569 in Lublin, an aggreement between the Crown of the Kingdom of Poland and the Grand Duchy of Lithuania was signed. A new country was created, called the Polish–Lithuanian Commonwealth. Upon the aggreements of the Union of Lublin, the formerly two countries had common monarchy, coat of arms, parliament (the Sejm), currency, as well as foreign and defense policies. Treasury, offices, military, and judiciary remained separate. The Polish–Lithuanian Commonwealth survived for over two hundred years and was the biggest, after the Russian Empire, country in Europe. Awaiting the official celebrations, we present the places associated with this historical event, that were awarded with the European Heritage Label - a sign granted to the objects that had an exceptional role in the process of shaping the history and culture of Europe, or developing the values forming the foundations of the European integration.

Located on the Castle Hill, the Holy Trinity Chapel is an unique example of connection between gothic architecture with Russo-Byzantine frescoes. It's one of the most precious monuments of the medieval art both in Poland and Europe. The chapel was erected together with the castle during the reign of king Casimir the Great in the second half of XIV century. At the beginning of XV century, by order of king Władysław Jagiełło, ruthenian painters decorated the interior of the chapel with frescoes in Russo-Byzantine style. The work was completed in 1418. The paintings were made in the technique of wet plaster. During one day only as much plaster was laid, as the artist could paint. Such way of decorating was arduous, but also very durable. The composition of the paintings was created with the use of the, so called, descending hierarchy. On the ceiling above the presbitery the Holy Trinity was pictured. A bit lower one can admire the seraphs, cherubs, and the Eucharystic themes. In the nave there are the silhouettes of the prophets, and the evangelical cycle. The whole is completed by the scenes presenting the lives of Christ, Mary, and the saints. An interesting trivia is the fact that in the Chapel we can see two out of three existing portraits of king Jagiełło that were painted during his life. There are also extraordinary writings scratched on the walls, two of them date back to 1569. One, located at the wall of the staircase, also consists of a writing in Latin: „unia facta Est cum ducatus Lytwanie”, meaning: "The union with the Duchy of Lithuania has become a fact". The chapel was erected as a two-floor building, popular in Latin Europe in middle ages. Both levels have the same floor plan. The upper level has a square nave and a polygonal prolonged presbitery. Typically gothic, lierne vault is supported by a massive, octogonal pillar. The presbitery and the nave is separated with the rainbow arch.

The Dominican Friars' Church and Monastery

One of the most important monuments in Lublin is the Dominican Friars' church and monastery. The Dominican Order came to Lublin in the 1230's. In 1342, after the Tatar invasion, by the decision of King Casimir the Great, on the site of a wooden oratory, a one-nave gothic church made of bricks was erected. The church of st Stanislaus Bishop and Martyr, was rebuilt a multiple times. The bittest renovation took place after the fire in 1575. The renovation gave the church the Lublin Renaissance style features.In 2018 another major renovation was finished. In 1569 in the church a thanksgiving service took place after signing the Union of Lublin. In 1967 pope Paul VI gave the church the title of the minor basilica. Together with the church, between XV and XVII century, an adjoining monastery was being built. In the oldest part we can see the rib vaulting and a portal from the XV century. Currently the monastery is being partially renovated. One of the most interesting places there is the old refectory with a characteristic palm vaulting supported by a single column. According to the monastery's tradition, the Union of Lublin was signed in the refectory in 1569. The Dominican Friars from Lublin for many centuries were in posession of one of the biggest relics of the True Cross. The relic arrived to Lublin from Kiev in XIV century. In 1991 the relic was stolen and not found until today. Both the church and the monastery are partially available for tourists.

The Memorial of the Union of Lublin

Located at the Litewski Square, the memorial of the Union of Lublin was erected thanks to Stanisław Staszic in 1826. It commemorates one of the most important events in the history of Lublin: The Polish–Lithuanian Union from 1569. The place where the monument stands is not accidental. This is where the Lithuanian deputies who came to the Union Sejm, set up their camp. The memorial was created by Feliks Bentkowski, and artist Paweł Maliński was the author of of the relief presenting two women shaking hands, between them the coats of arms of Poland and Lithuania.