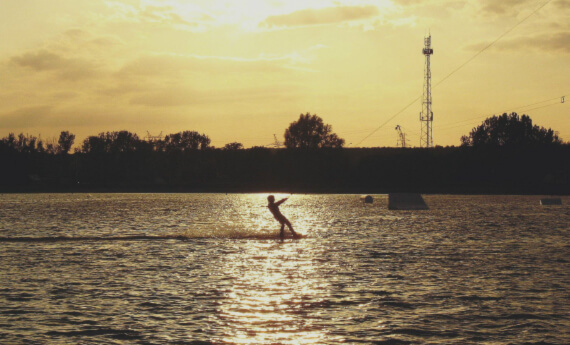 The Zemborzycki Reservoir, sometimes called the "Lublin Sea", lies in the floodplains of the village of Zemborzyce. It is fed by the Bystrzyca river. The reservoir was built in the years 1970-1974 with a large participation of Lublin residents, under the so-called social act.

The Zemborzycki Reservoir is currently a perfect place for recreation for Lubliners and tourists coming to the city.

Well-developed sports infrastructure allows practicing many sports. For cyclists, a route was built along the shoreline. From the center of Lublin to the reservoir you can reach a separate bicycle path that runs along the Bystrzyca river. There is a city bike rental system station at the Zemborzycki Reservoir.

There are also marked routes for those practicing jogging, Nordic walking, and cross-country skiing.

Water enthusiasts will be pleased with the Sunny Wrotków swimming pool complex (open in summer), water equipment rental, and one of the first water skiing tracks in Poland. The Zemborzycki Reservoir is also a paradise for anglers. The most common fish in the basin is bream but there are also roach, perch, grass carp, carp, and predators such as pike, zander, and catfish.

In the summer season, catering facilities operate in the area of ​​the Zemborzycki Reservoir.