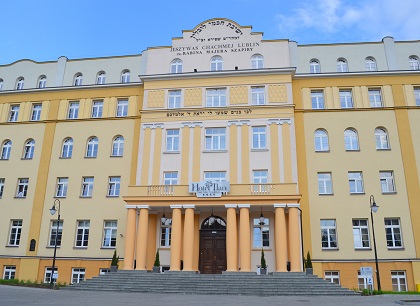 Majer Szapiro announced his intention to build a modern rabbinical school in Lublin during the World Jewish Congress in Vienna in 1923. Szapiro believed that Lublin, called the Jerusalem of the Polish Kingdom, would be the perfect place for this type of initiative. A famous Yeshiva existed here in the 16th century, eminent Talmudic scholars such as Salomon Luria and Szalomon Szachna had lived here. Lublin was also perceived as one of the main centers of Hasidism in Poland. The once famous tzaddik Yaakov Yitzchak Horowitz, known as the Seer of Lublin, had lived here as well.

To raise the funds needed to build the school, Majer Szapiro traveled across Western Europe and North America. He managed to raise about 60,000 US dollars, which allowed to finance about half of the investment. The rest was financed with a loan taken from the bank.

The ceremonial opening of the Yeshivas Chachmei Lublin took place in 1930 and was an event of global importance. Majer Szapiro became the first rector of the university. He died in 1933. The activity of the Yeshiva continued until the outbreak of World War II.

At present, the building belongs to the Lublin branch of the Jewish Religious Community in Warsaw. Hotel Ilan occupies part of the building. An exhibition presenting the history of the former university was organized in the rest of the building. You can also visit the still functioning synagogue. A visit is possible every day except Sabbath time.