What to see in Lublin? | Sightseeing in Lublin

There are many unique places and monuments in Lublin. Among them there are those that you must see if you want to know the history of the city well. The most valuable is the Holy Trinity Chapel on the Castle Hill, the walls of which are covered with XV century Ruthenian-Byzantine frescoes. It is an extraordinary place wchich, just like the Basilica of the Dominicans Friars, remembers the events of the conclusion of the Polish-Lithuanian Union in 1569. Both sites have been awarded with the European Heritage Label. Lublin's Old Town with its well-preserved, mainly Renaissance buildings with traces of Gothic, Baroque and Classicism, was honoured with the Historical Monument title. Have a wonderful visit.

The Holy Trinity Chapel, located on the Castle Hill, is a unique example of combining Gothic architecture with Ruthenian-Byzantine frescoes. It is one of the most valuable monuments of medieval art in Poland and Europe. The chapel was erected together with the castle by king Casimir the Great in the second half of the XIV century. At the beginning of the XV century, at the request of king Władysław Jagiełło, Ruthenian painters under the supervision of master Andrzej covered the interior of the chapel with frescoes in the Ruthenian-Byzantine style. The works were completed in 1418.

The Lublin Castle, standing on the top of the hill, is one of the architectural and historical symbols of Lublin. Kings often visited it, king Władysław Jagiełło came here many times, and Jan Długosz, Polish chronicler, tutored the sons of king Kazimierz Jagiellończyk for two years. On July 1, 1569, the Polish-Lithuanian Union, known as the Union of Lublin, was signed at the Lublin castle during the Seym session of the Crown and the Grand Duchy of Lithuania, with the participation of King Zygmunt August. It was the first real interstate union concluded in Europe. In the XVII century, during the Swedish deluge, the castle was ruined. In the XIX century, a prison building was built on the site of the destroyed castle buildings. In 1957, the Lublin Museum, now the National Museum in Lublin, was opened. The famous painting "The Union of Lublin" by Jan Matejko is exhibited in the painting gallery.

The Romanesque tower, also known as the keep or the donjon, is the oldest brick building on the castle hill and at the same time in the whole of Lublin. The tower was probably erected in the second half of the XIII century. The building is about 30 meters high and the thickness of its walls at the lowest level reaches 4 meters. Currently, there are historical exhibitions in the tower and on its top there is an observation deck with a magnificent view of the Old Town, Podzamcze district, central and eastern part of Lublin. 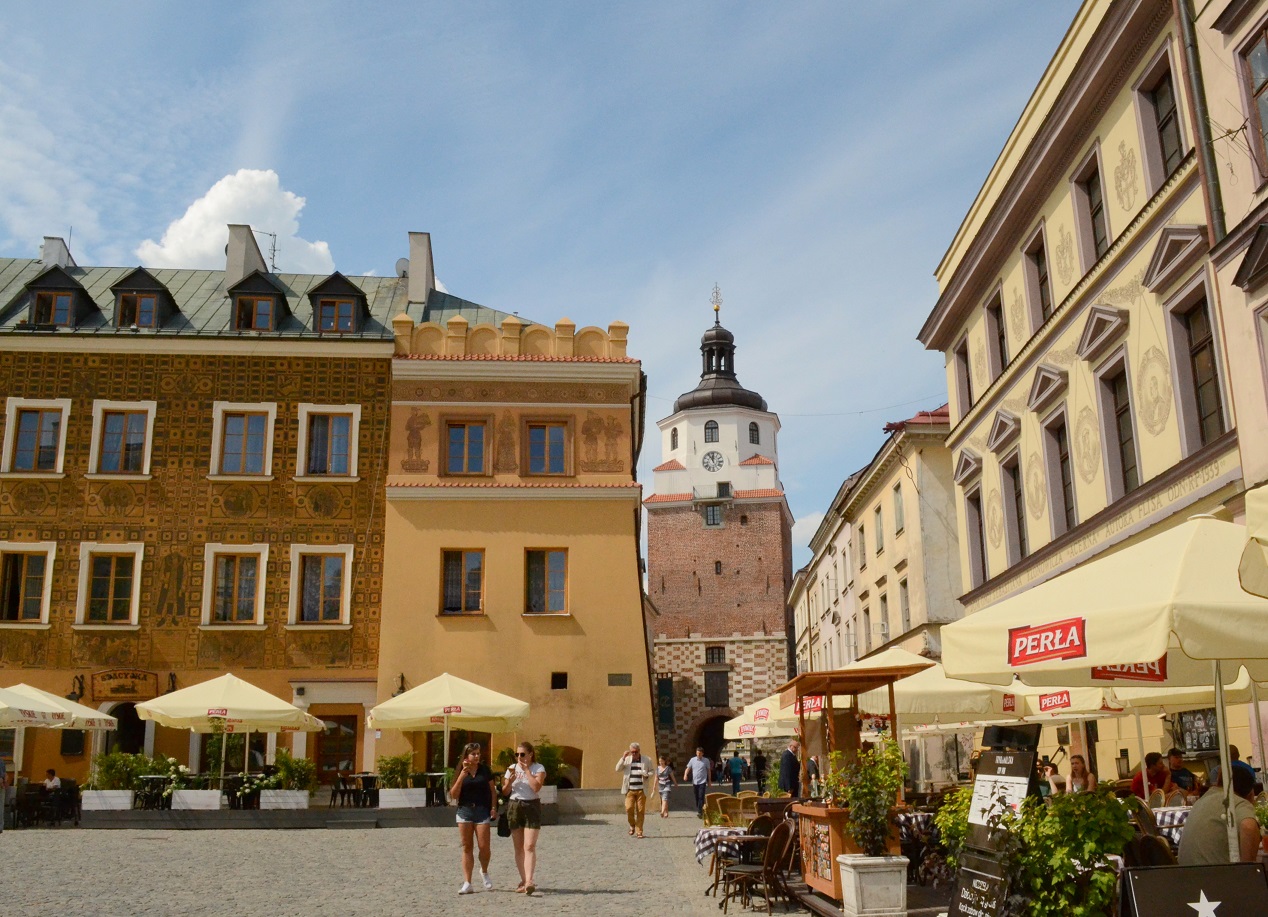 The Old Town Market Square in Lublin was laid out over 700 years ago, after receiving city rights (August 15, 1317). It has a well-preserved original architectural layout. There are impressive tenement houses around the Market Square, and in the central point stands the old Town Hall, which in 1578 became the seat of the Crown Tribunal. In the basement of the former Tribunal, there is the Lublin Underground Route.

Church and Monastery of the Dominican Friars 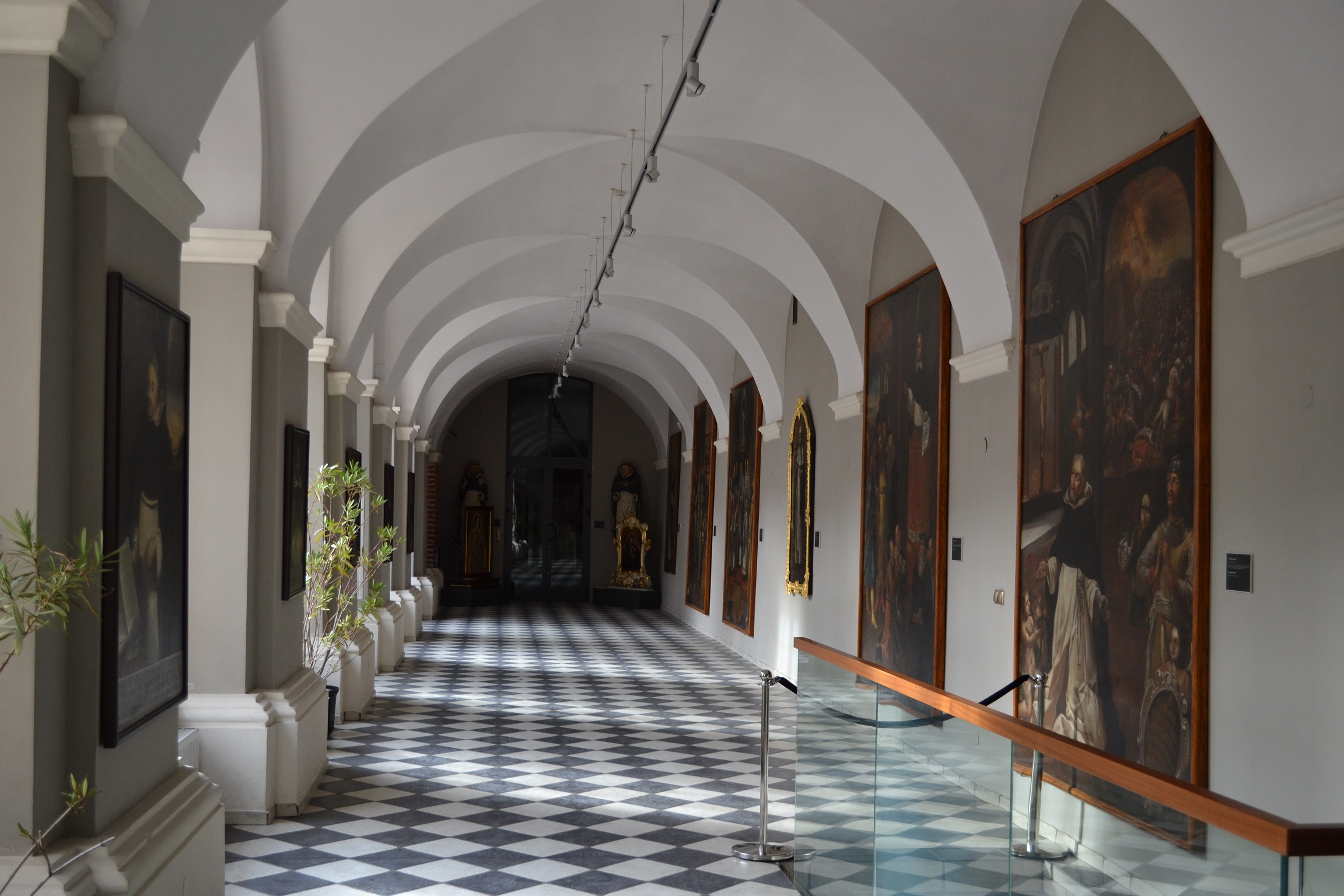 The Dominican Order came to Lublin in the 1330’s. The temple was expanded several times. The largest reconstruction took place after the fire in 1575. The buildings were then given the features of the Lublin Renaissance style. In 1967, the church was granted the title of a minor basilica. According to the monastery tradition, the Union of Lublin was signed in the refectory in 1569. After the conclusion of the Union, a solemn thanksgiving service took place in the church. For several centuries the Lublin Dominicans were in possession of one of the largest relics of the Holy Cross in the world. It was stolen in 1991 and has not been found to this day. Both the church and the monastery with the treasury are open to the public. 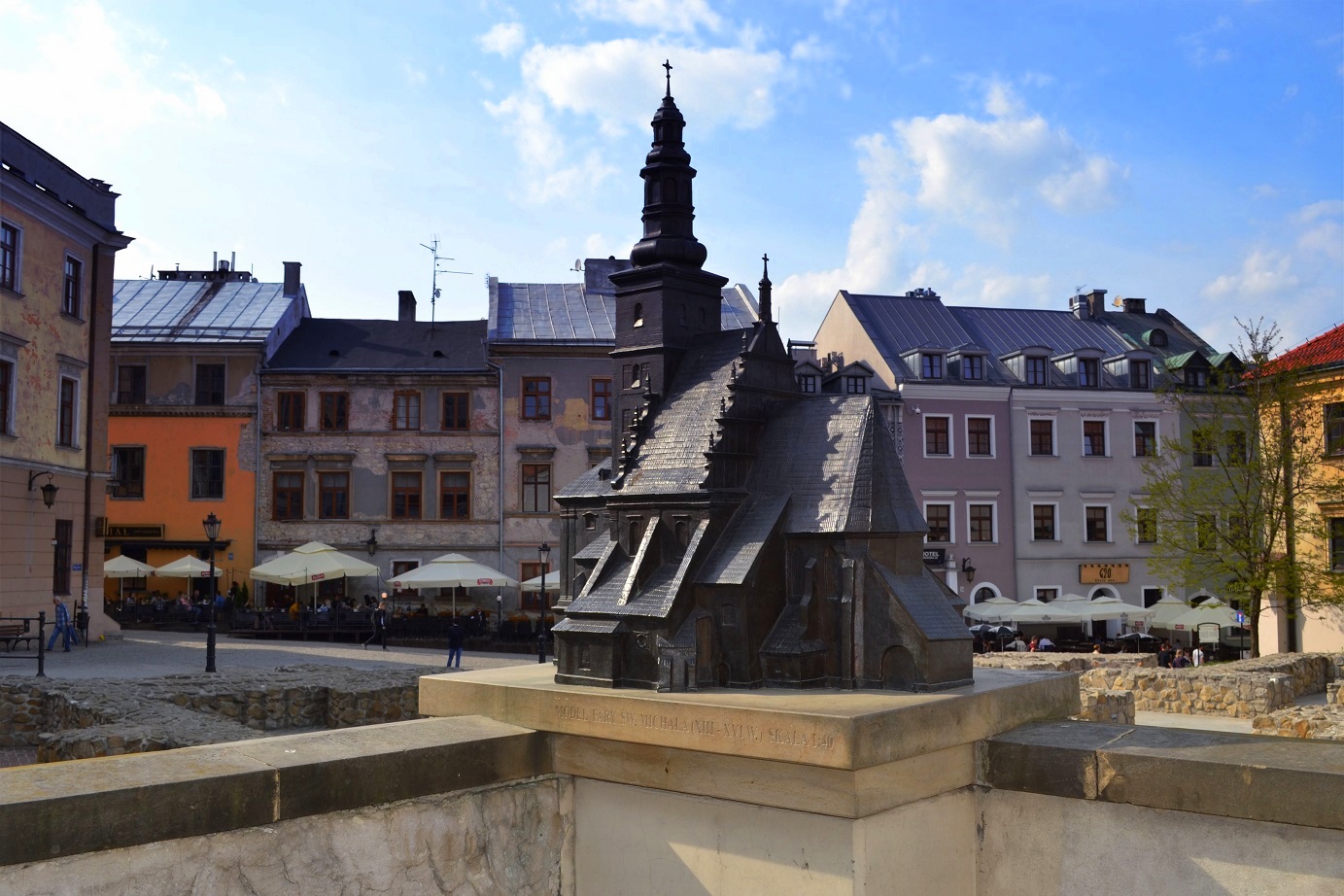 The name of the square refers to the fact that the church of st. Michael the Archangel used to stand in this place. It was the first parish church in the city. The temple was probably built in the XIII century. According to the legends it was erected by prince Leszek the Black as a votive offering after the victorious battle with the Yotvingians. In 1844 the temple was demolished, officially due to the poor technical condition of the building. 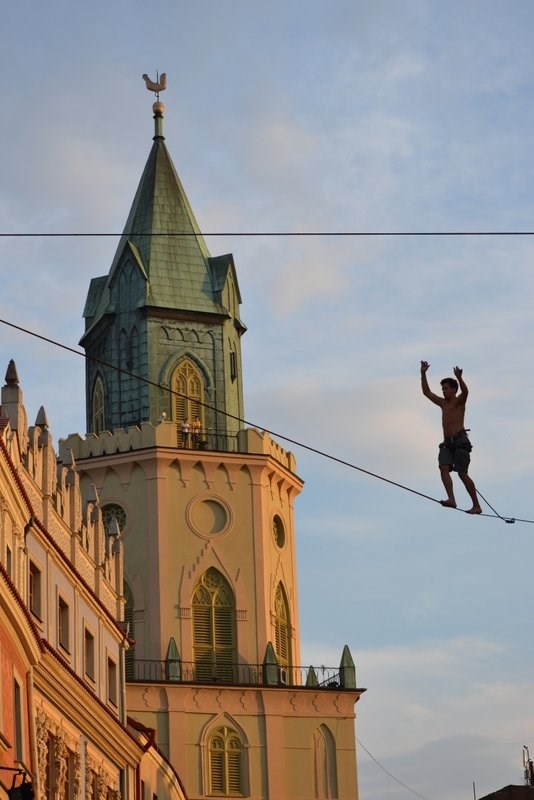 "On its tower a tin cock fluttered, another - bore a clock that hummed a tune", this is how Józef Czechowicz's "Poem about Lublin" begins. According to the legend, the cockerel which stands on top of the Trinitarian Tower, used to warn the townspeople of the impending danger. Inside the tower there is the Archdiocese Museum of Sacred Art, which presents a collection of religious sculptures, paintings and many other interesting exhibits. There is an observation deck at a height of 40 meters, from which you can admire the panorama of Lublin. 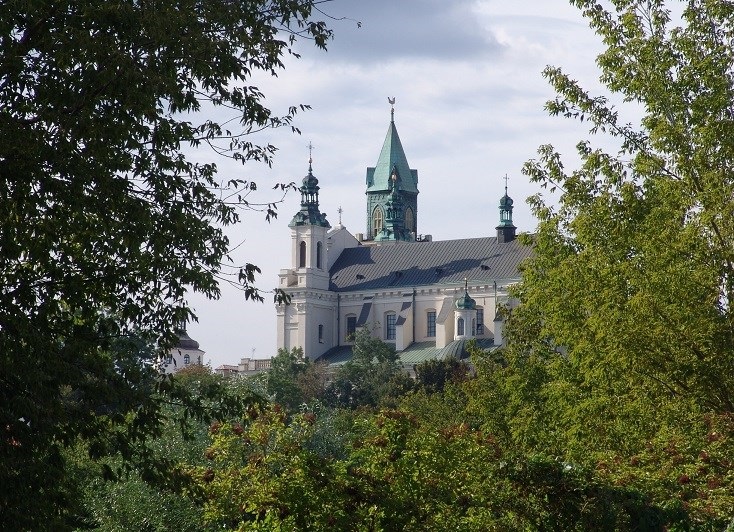 The temple was built for the Jesuit Order in the years 1586 – 1604. It was designed by Italian architects Jan Mario Bernardoni and Józef Briccio. The baroque church was modeled on the Roman Jesuit temple of Il Gesu. After a fire in 1752, it was rebuilt. It was then that the famous illusionist polychromes were created by a famous painter, Józef Mayer. In the Cathedral, one must see the unusual acoustic vestry, where a whisper said to the wall in one korner can be heard on the opposite side of the room. 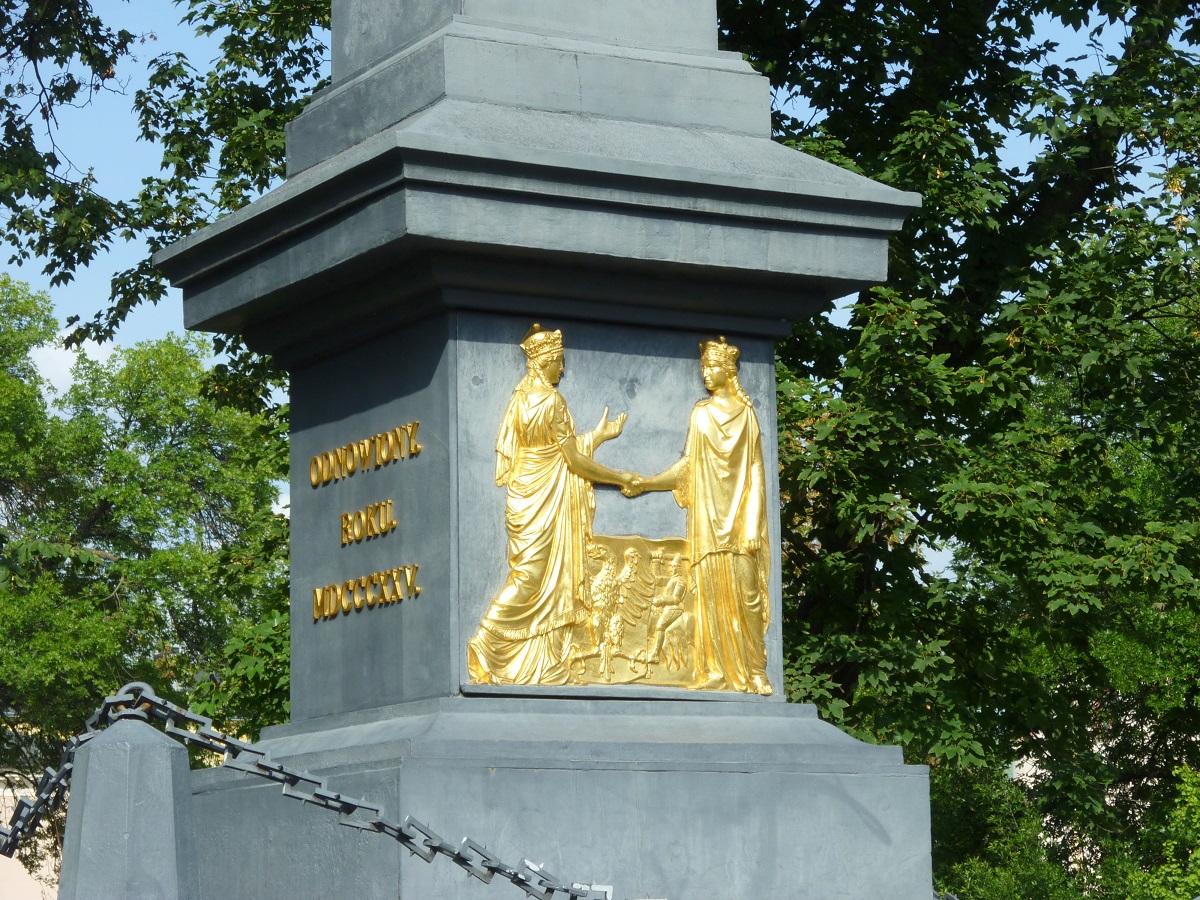 According to the legends, this was the campsite of Lithuanians who came to Lublin for the session of the Seym that was concluded with the signing of the Polish-Lithuanian Union in 1569. One of the most important events in the history of Poland is commemorated by the impressive obelisk-shaped monument. It is now the city's representative square. In the summer season, multimedia fountain shows presenting spectacular films about the history of Lublin are displayed on the water curtain.. 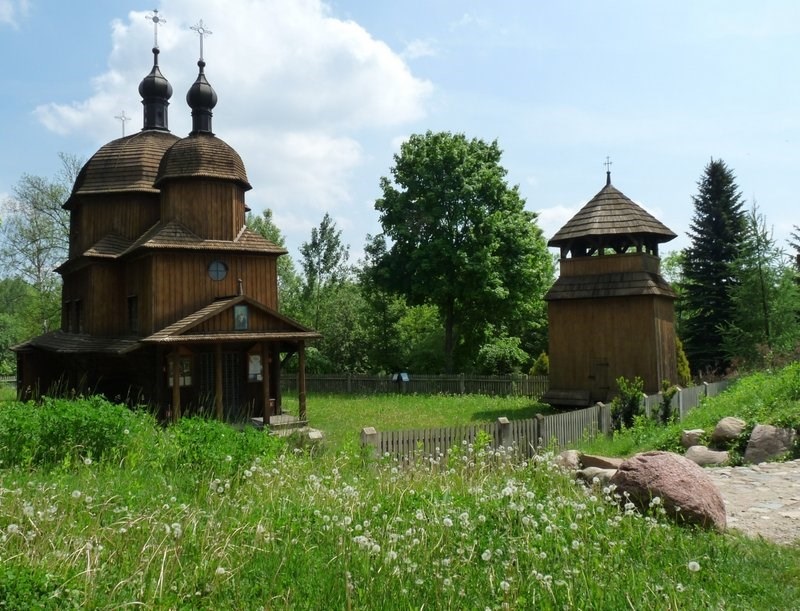 Picturesquely situated Open-Air Village Museum in Lublin is one of the largest and most beautiful open-air museums in Poland. The place presents monuments characteristic of villages from different parts of the Lublin Region. The atmosphere is added by agricultural and horticultural crops as well as farm animals such as horses, goats, chickens, geese, and ducks. In the Provincial Town of Central Europe section, one can see faithfully reconstructed buildings,such as the town hall from Głusk, the arrest from Samoklęski, or the restaurant from Zemborzyce. 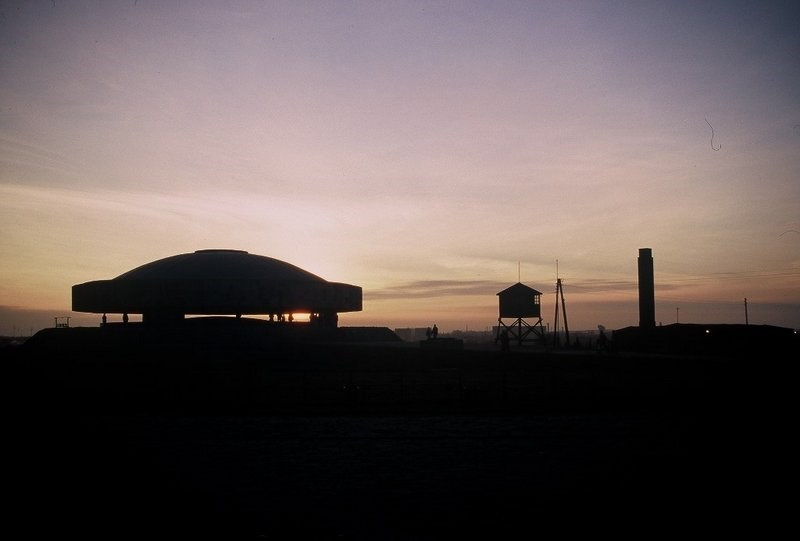 The German concentration camp called Konzentrationslager Lublin (KL Lublin), commonly known as Majdanek, was established by the decision of Heinrich Himmler and covered an area of 270 ha. It functioned from October 1941 to July 1944. The prisoners came from around 30 countries. The State Museum at Majdanek reminds of their tragic fate.

There are many more interesting places, come and see for yourself. Start your tour at the Lublin Tourist and Cultural Information Centre (st. Krakowskie Przedmieście 6), where you will receive all the necessary information. Enjoy your trip!